Filipino youth are benefiting from a strong education system, but they face significant health risks.

The Philippines has mixed scores across domains, placing it 18th overall and in the middle tier of countries in the Index. It ranks 6th in education and 10th in gender equality, but the country has lower ranks in the health, information and communication technology (ICT), and economic opportunity domains. 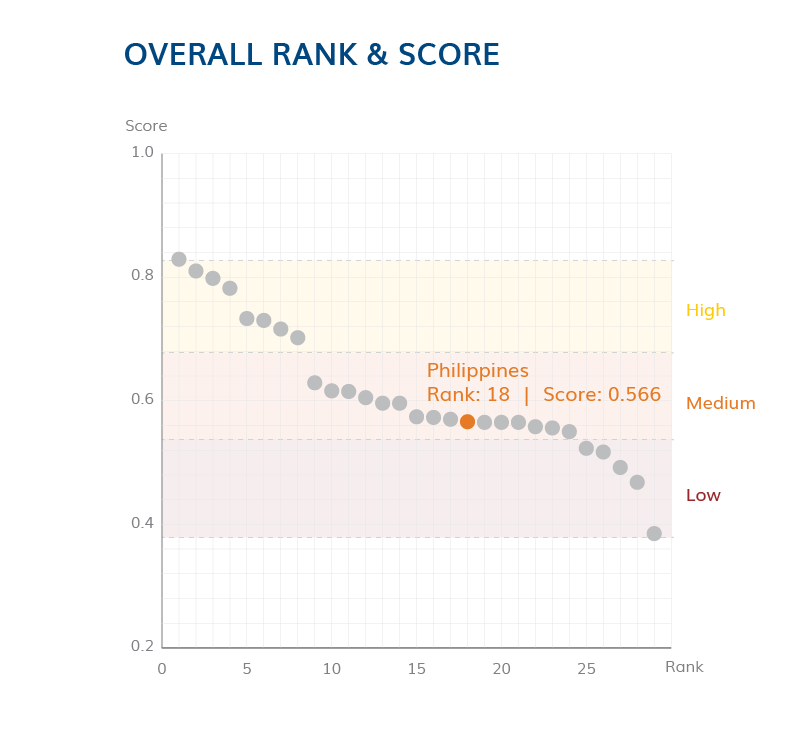 Several factors explain the Philippine’s strong education performance. Public spending on education has increased since 2009, reaching 20 percent in 2014 (compared to the Index average of 16 percent for the same year). Youth literacy has sharply increased since 2000 and now stands at 98 percent, slightly higher than the Index average of 96 percent. An increased focus on and investment in education may also be contributing to the country’s rising lower secondary completion rate, which has increased steadily since the early 2000s, to 82 percent in 2013.

Filipino youth face significant health challenges. The adolescent fertility rate has increased over the past 15 years and currently outpaces the Index average at 63 births per 1,000 women ages 15 to 19, compared to 42 per 1,000. At 27 percent, tobacco use also exceeds the Index average of 21 percent. 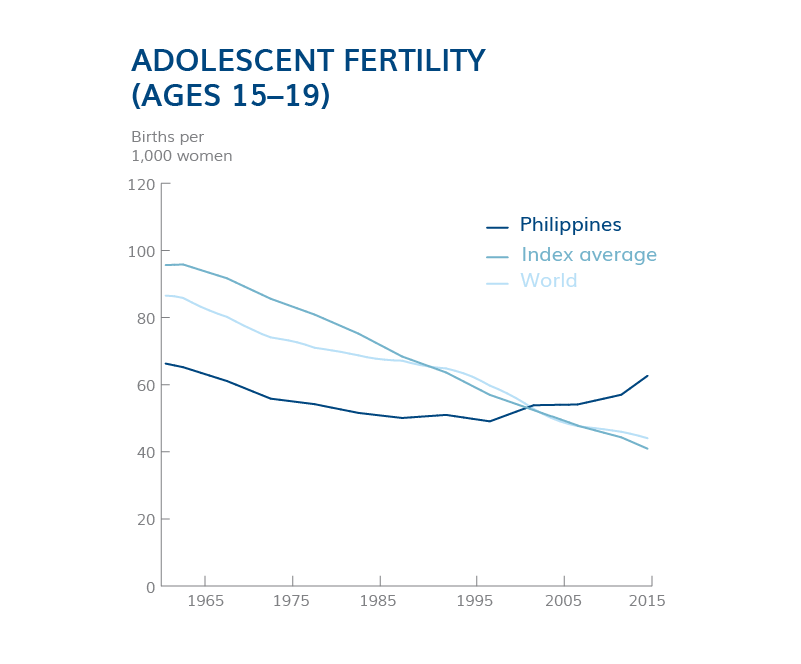 Limited ICT infrastructure means that only 27 percent of youth report having a computer at home with online access, and only 24 percent of the population uses the internet. However, more youth are using mobile phones than ever before; in the country, there are 118 mobile cellular subscriptions for every 100 people.

The Philippines ranks 24th in the economic opportunity domain. The rate of youth unemployment (16 percent) has declined only marginally since 2010, and 25 percent of young people are not in education, employment, or training (NEET). These rates are above the Rising Income Asia & Oceania regional and Index averages of 14 and 16 percent, respectively. While early-stage entrepreneurial activity (17 percent) is higher in the Philippines than in other Rising Income Asia & Oceania countries (14 percent), youth borrowing remains low at 3 percent, ranking the Philippines 24th on this indicator.

Despite the country's sluggish growth in GDP, the majority of Filipino youth remain optimistic about their economic opportunities. Sixty-nine percent of youth surveyed believe their future standard of living will be better than that of their parents.

Youth also feel well-served by their government; the country ranks 4th on this indicator. Only 45 percent of youth surveyed say they believe their government does not care about their wants and needs.

Education-related perceptions match the objective data in this domain. Eighty-two percent of youth polled say they are satisfied with the quality of education system or school where they live.

Youth perceptions on health also mirror the objective health data. Only 55 percent of youth surveyed think that they are in near perfect health, putting the Philippines at 26th among Index countries for this indicator.