South Korea has mixed scores across domains, placing it 8th overall and in the top tier with high income countries in the Index. It ranks 5th in information and communication technology (ICT) and gender equality but has lower ranks in the health and education domains. 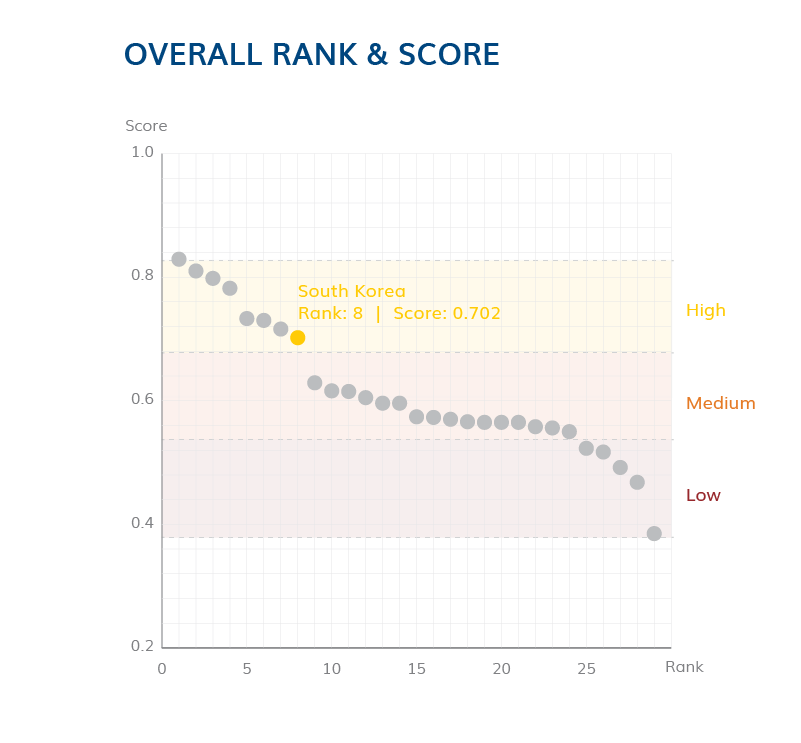 In gender equality, the country has a very low rate of adolescent female marriage (less than 1 percent), and 96 percent of youth surveyed feel women should have the same rights as men.

A strong GDP per capita (US$25,023), low youth unemployment (10 percent), and high competitiveness score (5 out of 6) influence South Korea’s rank of 10th in the economic opportunity domain. Low rates of youth borrowing and early-stage entrepreneurial activity—3 percent and 7 percent, respectively—indicate a strong formal economy in which youth may be opting for formal employment rather than entrepreneurship. 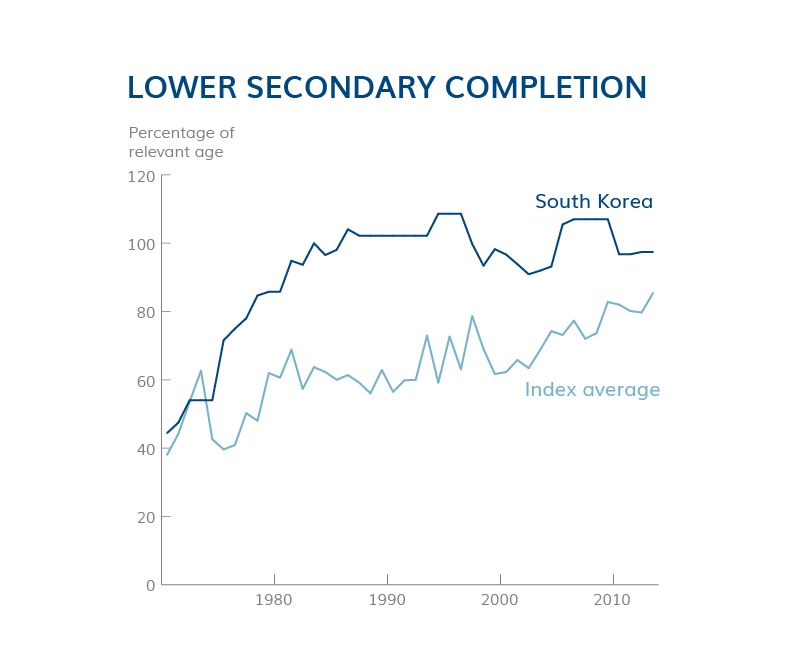 South Korea ranks 20th in the education domain, driven by a low level of government spending on education (9 percent, compared to the Index average of 16 percent). However, this comparatively low investment does not negatively impact enrollment or completion rates. On both indicators, South Korea outperforms the Index average: 98 percent secondary enrollment compared to 89 percent, and 97 percent lower secondary completion compared to 84 percent. South Korea also has a 100 percent literacy rate. Despite these strong results, only 55 percent of youth surveyed indicate they are satisfied with their education.

South Korea’s health rank of 22nd is driven by high tobacco use (27 percent), and high rates of youth stress (65 percent of youth surveyed say their lives are too stressful). With 22 suicides per 100,000 youth, the country exceeds the Index average for self-harm fatalities (16 per 100,000).

Youth perceptions in South Korea clearly illustrate the pattern observed for many Index countries of an inverse relationship between strong quantitative performance and weak youth perceptions. Despite a high rank in economic opportunity, only 25 percent of youth surveyed feel that their standard of living will be better than that of their parents.

While South Korea performs well in safety and security and has a low rate of youth interpersonal violence, 43 percent of youth surveyed say they fear violence, harassment, and bullying at school or work.